History of All Saints' 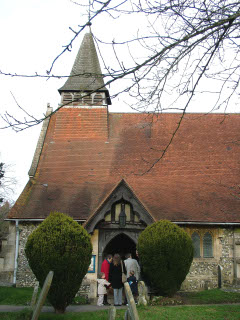 All Saints’ Church dates from about 1250 AD when it was built by Gregory, the Vicar at that time, and much of that structure remains today. The list of Vicars on the board opposite the main entrance begins with Gregory and continues over the centuries to the present day. In 1893 the south aisle was added and the west end of the church was extended; the 13th century south door was moved stone by stone to its present position and a consecration cross can be seen on the door jamb. The original bell turret was replaced by the present one. Apart from these changes the church is much as it was when Gregory built it in the 13th century. On the north wall is a wall painting of St Christopher. It is ascribed to the 15th century and was uncovered in 1881. Also on this wall a number of ‘put-log’ holes are exposed. These show where some of the scaffold timbers were inserted during the original construction.

The two-light window by the pulpit was probably inserted in the 15th century, sadly the window was vandalised in 1965 and again in 2008, but the border has twice been re-created using fragments of the glass which date from the 15th century. Immediately opposite is a window portraying Archbishop Cranmer presenting the first English Prayer Book to King Edward VI. This perpetuated the tradition that the new prayer book was first used in this church. On the sill of this window are plaques commemorating the first televised church service by the BBC – our Harvest Festival in 1950 – and Bishop Tom Butler’s visit to inaugurate Common Worship in 2000. An interesting feature in the chancel is the priest’s door and low-side or leper’s window, both of which date from 1250. The window was used for hearing confessions. Lepers were not allowed to enter church but could watch the mass through this window. The Hill organ was installed in 2003. An illustrated Guide and Short History is available from the church, price £3. A booklet on the history of All Saints’ organs is also available from the church, price £1.